On Thursday, September 9, OVHcloud teams in Croix received a visit from Cédric O, Secretary of State for Digital Transition and Electronic Communications.

This meeting, on the sidelines of the FIC in Lille, was under the sign of the economic dynamism of the territory and of the European digital sovereignty. Mr. O was accompanied by Catherine OSSON, Member of Parliament for the North, Amélie PUCCINELLI, sub-prefect of the Hauts-de-France region, Cédric CAUCHE, Mayor of Croix, Christophe COULON, Regional Councillor of the Hauts-de-France, and Sam DAHMANI, Delegate General of the French Tech Lille.
Elena POINCET, CEO of Tehtris, and Arnaud COUSTILLIERE, President of the Cyber Centre of Excellence were also present, symbolising the gathering of digital players to build a European ecosystem together.

Cedric O began his visit with the Croix factory, a key site for OVHcloud, which reflects our integrated industrial model. This guarantees agility, with production averaging 1500 servers per week, as well as resilience, security and innovation - thanks, among other things, to our experimental datacentre.

With this visit, the Secretary of State for the Digital Transition was also able to measure our economic anchor in the Hauts de France region, which translates into jobs, investments, and strong links with our local partners (AixMétal and Isodesign). Our Croix factory, as well as our datacentres and offices around the world, are full of talented employees, and this is constantly evolving, thanks to our global recruitment campaigns.

Furthermore, the site is also an industry model designed with sustainable growth in mind. The innovations developed at Croix, such as our water cooling system, are at the heart of our environmental approach. 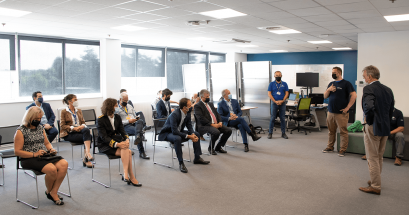 Digital sovereignty is a key issue for the state. OVHcloud is one of those who can commit to a sovereign cloud that respects European values and is growing fast. A true proof of French success, as Cédric O points out:

Today, the company provides remote storage solutions, both public and private, for shared hosting and dedicated servers in 140 countries. A beautiful success story made in #FrenchTech. Congratulations to the whole team!” 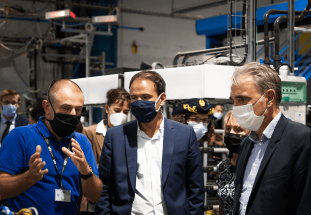